Two new studies have reaffirmed that immersive Jewish experiences for Jewish adolescents and young adults have a lasting impact on their long-term involvement in the Jewish community — everything from taking on leadership roles to educating their children as Jews.

One survey was conducted for the Reform movement to gauge the impact of involvement for the 10,000 youths annually who attend its 17 summer camps, and the 8,000 teens who participate in the congregation-based NFTY youth movement.

The second survey was conducted for Masa Israel Journey, which offers a variety of internships, study and volunteer opportunities in Israel lasting between five and 12 months. Both surveys were conducted by Rosov Consulting in Berkeley, Ca. and Jerusalem.

The Union for Reform Judaism’s study “determined that 90 percent of our alumni 25 to 29 participated in some sort of Jewish experience while in college — participating in Hillel, taking Jewish study classes or joining a Jewish fraternity,” said Miriam Chilton, URJ’s vice president of youth.

She said that 82 percent of alumni who responded belong to a synagogue, temple, minyan or chavurah and that 60 percent attend synagogue services at least once a month.

“These percentages are equal to [the Conservative movement’s] Ramah camps and other organized Jewish groups that provide immersive experiences,” Chilton stressed. 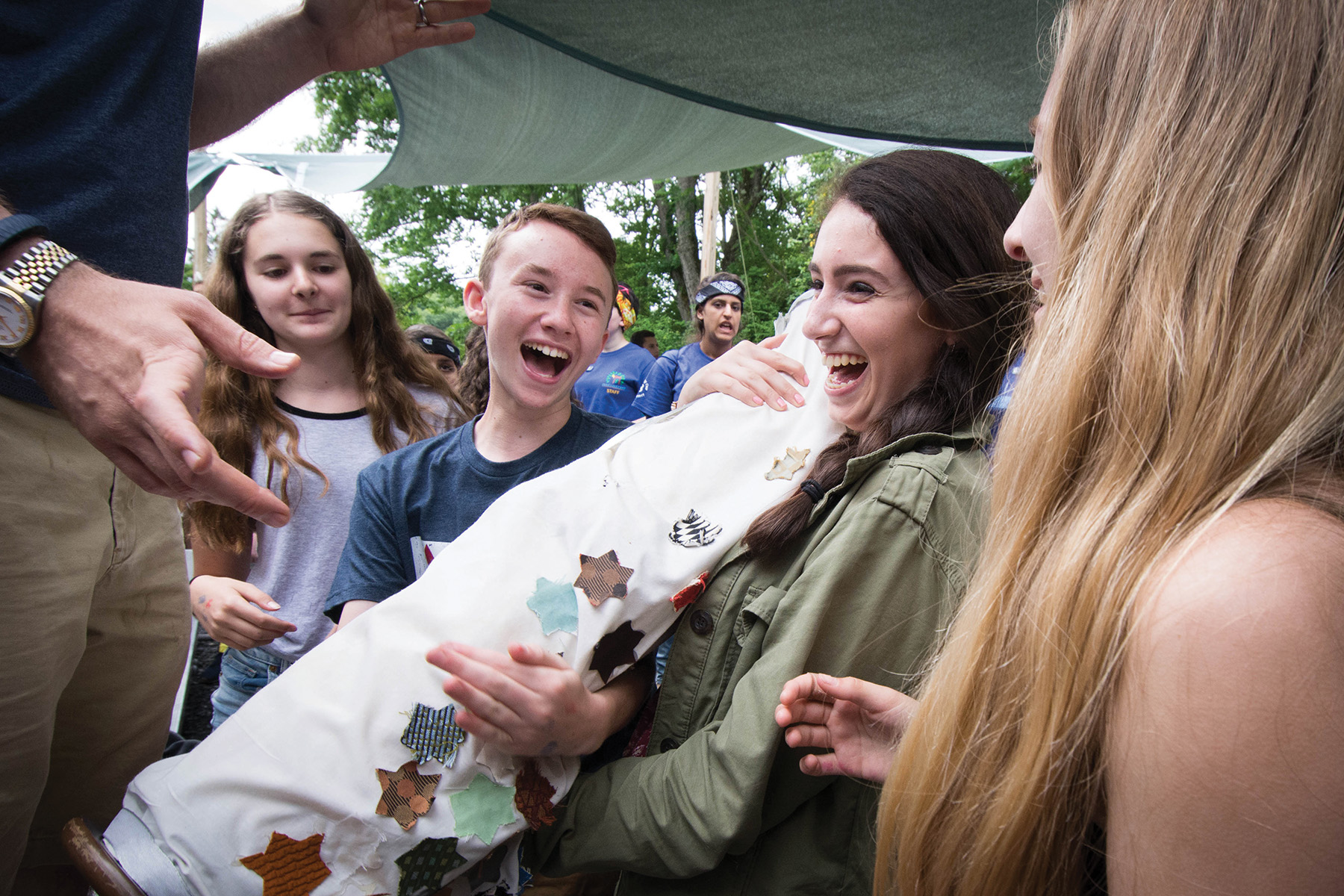 The study, the first of its kind by the Reform movement, generated responses from those who ranged in age from 25 to those in their 90s.

“We wanted to understand the long-term impact across all of the age cohorts,” Chilton said.

Not only are the alumni active in Jewish life, but the survey found that 87 percent of them do volunteer work that is important to them. It found also that alumni are concerned about social justice issues, with 94 percent of them saying anti-Semitism is a pressing concern and 85 percent listing racial equality as a concern.

The survey found also that 83 percent of the alumni married other Jews at a time when other surveys — and anecdotal information from within the Reform movement — have found that intermarriage is on the rise.

“The URJ study found that youth programs have a normalizing effect on lifelong Jewish outcomes — these outcomes of choosing to be Jewish, choosing Jewish education for their children, seeking to do good in the world are the same for all alumni, regardless of whether they come from an intermarried household or not,” Chilton said.

The findings belie the claims of those in the Jewish world here and in Israel who are critical of the Reform movement. In 2016, an ultra-Orthodox Knesset member, Yisrael Eichler, compared the Reform movement to a “mentally ill person.” And Israel’s minister of religious affairs, who is Orthodox, once created a firestorm when he said he did not consider Reform Jews to be Jewish.

Bethamie Horowitz, a social psychologist who is co-director of the Ph D. Program in Education and Jewish studies at New York University, said this study “shows a positive and strong Jewishness [by alumni] that is also related to social action and tikkun olam [efforts to repair of the world] and all kinds of laudable things. The story it tells is for those who are actively involved.” Steven Bayme, director of Contemporary Jewish Life at the American Jewish Committee, added that “statements that are dismissive of the non-Orthodox movements are not only wrong but deeply hurtful and counterproductive in the sense that what needs to be encouraged are serious expressions of what being a Jew means. Dismissing them pulls the rug out from underneath those who are trying to maintain serious Jewish expression.”

Chilton said the survey shows that “those who take a leadership role in our camps, congregations and in our NYFY program experience long-term gains in leadership skills later in life.”

Horowitz cautioned, however, that only a relatively few alumni — 3,296 — completed some or all of the survey after some 18,000 were contacted directly and another 24,000 were solicited through social media advertisements. There was a similar issue with the Masa study, she said.

Bayme said he has found that “there is a critical need for serious, non-Orthodox Judaism, and programs like these [of the Reform movement] are an expression of serious Judaism. Programs like these are the ones most likely to be sustaining and, in turn, transmitted. What we need are immersive experiences that are an expression of the seriousness of the Reform movement.”

Bayme added that it is “not surprising and [is] worthy of reporting that immersive experiences do work.”

The Masa study demonstrated that as well. Some 941 alumni who participated in the program within the last seven years answered the questionnaire and 35 were interviewed. Masa was founded in 2004 for those 18-30; it has 140,000 alumni from 60 countries.

The survey found that more than half the respondents self-describe themselves as “Jewish leaders” either professionally or as volunteers on a Jewish federation committee, Hillel or another Jewish communal organization, according to Alex Pomson, managing director of Rosov Consulting, which was hired to do the survey.

Most Masa participants — about 90 percent — have finished college, although Masa offers also a gap-year program and provides the framework for a semester abroad program. Some 60 percent of participants are women and almost all are single.

“We found that when it comes to leadership, Masa plays two kinds of roles – incubator and accelerator,” Pomson said. “For those who have little experience, Masa awakens their leadership. For others who come and have already had a leadership role such as on campus, the program helps them build the skills to become a better leader. So [the impact] is based on prior life experience.”

Liran Avisar, Masa’s CEO, said the organization is making a concerted effort to develop future leaders for the Jewish community. She cited a 2014 study by the Bridgespan Group that found that 75 to 80 percent of Jewish non-profits were unable to fill leadership positions and were not developing leaders or able to retain them. At the same time, there was a major gender gap among the executives of Jewish non-profits.

“Leaders are self-chosen from the beginning and this experience is strong, deep and transformative,” she said. “For me, the two challenges we face are building a pipeline of leaders for the Jewish community and retaining those young leaders to be the future leaders.”

Developing those leadership qualities in Israel provides the young people with an understanding of the complexities of the Jewish state so that they will be able to “deal with the disagreements rather than shy away from them,” Avisar said. “Those with a knowledge of Israel can tackle the challenges. We are creating Jewish leaders with an understanding of the place and its complexities. They are developing for themselves the skills they will need to deal with the Israel question when they are back in their communities.”

In addition, Masa has started a special empowerment track for women so that they will be trained to work in Hillel or within Jewish federations.

The study found that fully 69 percent of alumni who see themselves as “Jewish leaders” see themselves also as “leaders” in the workplace. It said that millennials define leaders as vision-driven, able to identify and solve problems, trustworthy, goal-centered rather than self-centered, and able to support teams to achieve change. Current Masa programs develop teamwork, empathy, maturity, confidence and responsibility, the study said.

“We have 12,000 participants every year — half from the United States, 2,000 from the former Soviet Union and 1,500 from Latin America — and the average age is 23,” Avisar said. “We are finding more young people coming who are not motivated because of Jewish identity but rather for career development and opportunities. Jewish identification unfolds throughout their experience.”